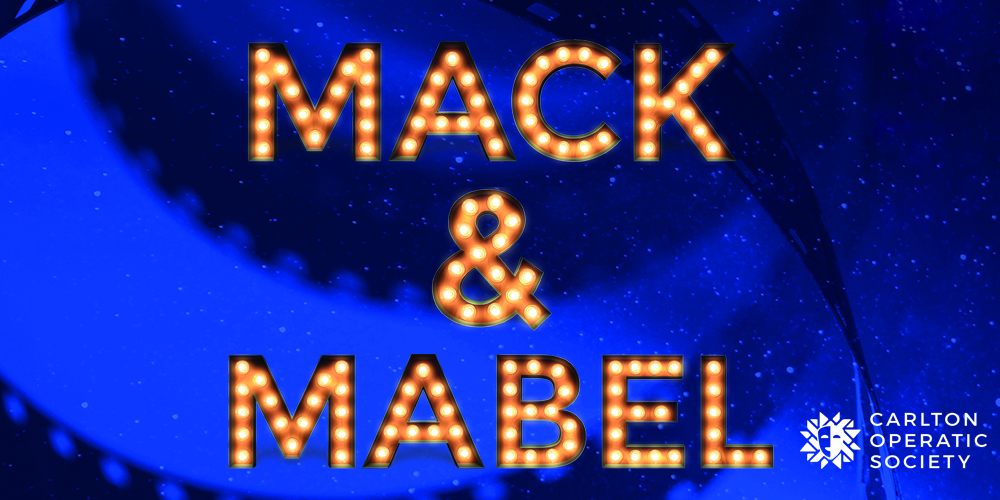 From the era of when 'Movies Were Movies' comes the smash hit musical Mack & Mabel, which returns to Nottingham in 2019 to both thrill and delight!

Based on the real-life romance between legendary filmmaker Mack Sennett and his beautiful, talented rising star Mabel Normand, it captures the excitement of Hollywood's golden age, the fun and action of the silent screen, the hysterical madcap chaos of Fatty Arbuckle and the Keystone Kops, and the glamour of the bathing beauties. A world where heroes wore capes, girls were tied to the railway tracks and it all ended with a pie in the face.

Mack & Mabel features an outstanding score by the great Jerry Herman (Hello, Dolly!, La Cage aux Folles) and is packed full of classic Broadway hits including I Won't Send Roses, Time Heals Everything and Tap Your Troubles Away.

Brought to you by the multi-award-winning Carlton Operatic Society (Grease, West Side Story, Top Hat) this wonderful musical comedy is both a poignant love story and a joyous celebration of the excitement, glamour and sparkling humour of the era of silent movies.

Please note that there are no concessions in the Balcony. * Only available via the Theatre Royal Box Office.

I always look forward to a Carlton Operatic production and once again with Mack & Mabel, the production team, cast, orchestra and crew have delivered another classic musical with skill, enthusiasm, technical excellence and love.

Although it is a temptation to discuss the on-stage and, in this production, on-screen performances, I wanted to first of all congratulate the production team. Chris Rees once again demonstrated why he is, I believe, simply the most accomplished Musical Director in the whole of the region. From the opening overture through every vocal performance from Principals, Family, Feature Roles and Ensemble the precision of delivery, dynamics and sensitivity to the vocal performance was a pleasure to experience.

Having also previously experienced first-hand the choreographic precision and attention to detail of Rachael Rees it was no surprise to see the exuberant, technically challenging and enthusiastic execution of the tap and other numbers by the whole cast, which is no easy feat...

Sarah Walker-Smith very successfully manged to bring the feel of Silent Movie to every aspect of the production, from the brilliantly executed sepia film inserts (which avoided the cliché of "grainy film") through the costuming and stylized over exaggerated film acting for the two-reelers. Sarah also managed to deliver the contrasts in the fortunes of the key characters as their respective story arcs making these very believable.

Graham Ward throughout the production delivered a forceful Mack. Sympathetic at times, frustrating, self-aware yet unable to let anything get in the way of his desire to deliver as many films as possible, as fast as possible and their ultimate success measured in box office takings. Sarah Millington was a completely believable Mabel, from sandwich seller, to enthusiastic cast member, movie star and finally a tragic drug addict.

The 'Extended Family' all added their individual contributions to the overall production. This was very much an ensemble team who all added to the success of the production so I won't mention every performer individually however I must call out Sean Goodwin's Charlie Chaplin which was well observed and refreshingly not too exaggerated, Ross Lowe, who brought exactly the right level of sleaze to his William Desmond Taylor and Helen Tunnicliff who made me laugh out loud on a number of occasions as Miss Jones.

The Ensemble, Bathing Beauties, Movie actors, Tappers and Keystone Cops all provided great impact to the production as did the sound, lighting and incredible orchestra who ensured that the cast had a superb lighting, staging and musical soundscape to show off their acting and vocal talents.

Congratulations one and all, and here's to Shrek in 2020

"Carlton Operatic have tonight again shown what an excellent society they are. Mack and Mabel is a big musical to perform: it requires excellent acting, singing and dancing, a lot of technical expertise and a clear vision of how to recreate a special era. Tonight's performance had all of these in abundance." - Theatre Online

"One of the best non-professional musical theatre shows of the year - 5 stars" - EastMidlandsTheatre.com