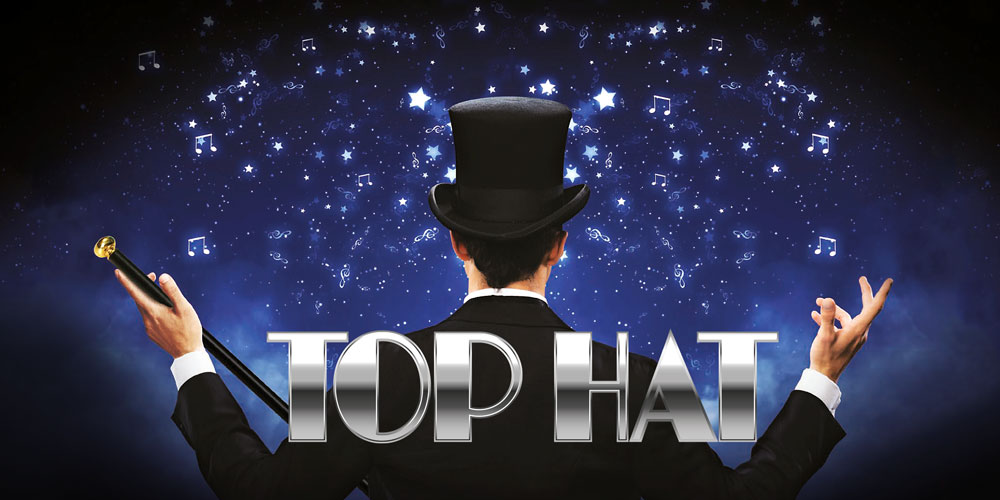 Music & Lyrics by Irving Berlin
Based on RKO's Motion Picture

An amateur production by arrangement with R&H Theatricals Europe

Take an exciting journey back to the golden age of Hollywood with Top Hat, one of the most glorious dance musicals of all time!

Originally a smash hit for Fred Astaire and Ginger Rogers, this exhilarating and hilarious romantic comedy brings to life the colour, glamour and glitz of 1930s Hollywood with an array of dazzling costumes and captivating tap dances.

Hot on the heels of Legally Blonde, Grease and West Side Story, the multi-award winning Carlton Operatic Society are back to take your heart on a magical, toe-tapping trip! Don't miss out!

Please note that there are no concessions in the Balcony. * Only available via the Theatre Royal Box Office.

Top Hat, by Irving Berlin, is one of the classic musical film/stage shows that is made for the big stage experience, with all the dance (Tap), voice projection and production challenges that brings. At the Theatre Royal this week, Carlton Operatic produced a show that was very much equal to those challenges.

Chris Rees has the reputation amongst many of the musicians I know as being one of, and for most the best MD around and this was evident in every aspect of the production. His leadership from the Pit brought the energy and precision to guide the dance numbers (which had been expertly choreographed by Rachael Rees) and provide a perfect soundscape to emphasise the light and shade in all the musical numbers. His obvious work in the rehearsal period with the principals and ensemble alike was rewarded with some great vocal performances and a great balance of sound from stage and orchestra throughout.

The show very much demonstrated Rachael Rees' choreographic skill and commitment as she and her talented cast has managed to deliver a Tap led show in 5 months where a significant number of the cast had limited, if any, previous Tap experience. The enthusiasm and enjoyment were very evident in the faces of the cast and the warmth of the response from the audience.

Ross Lowe directed the evening with great aplomb with a very faithful rendering of the original Top Hat production, emphasising the humour and keeping the action moving at all times.

The on-stage team of Principals and Ensemble worked very well together in the production. Jonathan Allen was a very believable Jerry Travers bringing energy, and a light touch to every scene. His developing relationships with Dale Tremont (a very assured performance by Abby Wells) was completely believable. The comedic led performances from Graham Ward and Sarah Walker-Smith were very enjoyable as was the loose limbed continental depiction of Alberto Beddini by Drew Dennis. Matt Wesson delivered a fusion of Jeeves and Widow Twankey in his portrayal of Bates that was a significant hit with the audience.

Lighting design was very effective throughout the performance as was the sound design and with the costume and stage management moving swiftly between each scene all supporting the great on-stage and orchestral performances.

Congratulations to all and I very much look forward to seeing you again next year for Mack & Mabel.

"If you want a night out that has class, style, great talent ... you need to look no further than this show." - Kev Castle

"Once again Carlton Operatic Society has proved they are at the top of their game, by producing an excellent show." - Theatre Online

"The classy Top Hat ensemble ... makes a perfect start to this most excellent production - 5 stars" - EastMidlandsTheatre.com