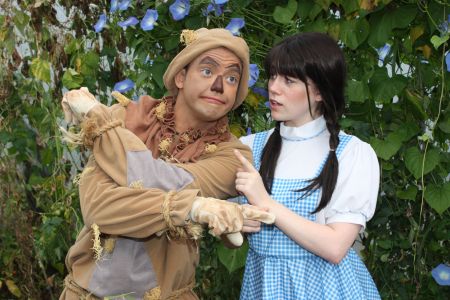 The Wizard of Oz - Reviews

This page will be updated as reviews are posted.

So it's off to meet the Wizard....but is it a wonderful wizard? That was the question on my lips as I visited the Carlton Operatic Society’s production of the infamous musical extravaganza The Wizard Of Oz at Nottingham’s Playhouse Theatre.

The local Nottingham-based company have stayed true to the original 1939 film version of this classic tale that saw Judy Garland spring to fame, and it recounts the tale of Dorothy Gale (Jessica Nicklin), an orphan girl living with her uncle and aunt at their farm in Kansas. When the evil Miss Gultch (Nicola Bilton) tries to get Dorothy’s beloved dog Toto put down (played by Barney Pilkington, officially the most gorgeous dog ever), Dorothy runs away and yearns to travel somewhere "over the rainbow."

She soon gets her wish granted when a tornado whisks her house away and takes her to the magical Land of Oz As Dorothy tries to get home again, she comes across various obstacles along her course, including roads made of yellow bricks, witches, a brainless scarecrow (Jonathan Allen), a heartless tin man (Graham Ward) and a cowardly lion (Simon Theobald).

Star turns from Nicklin, Bilton and Barney the dog make this a must-see

The shining stars of the night were Nicklin with her portrayal of a wide-eyed innocent Dorothy not only being believable but also moving as she rapidly stole the audiences' hearts, and also Barney – the most gorgeous Yorkshire terrier this side of the Yellow Brick Road. Not only was he a scene stealer but he also seemed to want to soak up the limelight as he had to be dragged off the stage at one point!

The Wicked Witch of the West (Bilton) also put on a superb performance and made you as frightened as the cowardly lion with her evil cackle and explosive special effects, although the humorous lion (Theobald) soon had you giggling in your seat to laugh away any fears she might have left you with. So put on those glittery red shoes, travel over the rainbow and head over to Nottingham’s Playhouse Theatre quickly to see this delightful musical....and take your little dog too, my pretties!

Audiences will be blown away by this vibrant reimagining of Frank Baum's immortal fantasy which is adapted with skill and style to suit the contemporary stage.

The talented trio, playing an allegorical representation of human weakness are quite magnificent, bringing humour, pathos and individual qualities to the fore.

Undoubtedly Judy Garland's Dorothy can never be bettered but impressive teenager Jessica Nicklin, who brings vulnerability and precociousness to a demanding role, shows all the hallmarks of a future star.

Just for good measure the Society casts the delightful Denise Palin as Good Witch Glinda and unleashes the brilliant Nicola Bilton as her sister the fearsome and vengeful Wicked Witch of the West, a formidable character whose blood curdling cackle would surely shatter glass!

An exuberant chorus with more than twenty children in exquisite, unique costumes, cast as the dimunutive residents of Munchkinland and seniors cast as crows, trees, flying monkeys and residents of Emerald City contribute to the brilliance of this wizard show.

Musical Director Chris Rees and his orchestra deliver the show's iconic score, Rachael Rees provides innovative choreography, and admirable teamwork from all involved makes this fabulous production a must see treat for all the family.

The RSC version provided quite a challenge artistically and a big challenge technically, but Carlton certainly approached this with plenty of talent and enthusiasm. Artistically the production team provided a sound base for the cast to successfully develop the wide range of characters and musical numbers in this version. On stage there was a superb performance from Jessica Nicklin as Dorothy, both vocally and dramatically, she was so well suited to the part. Excellent performances as well from Jonathan Allen (Scarecrow), Simon Theobald (Lion) and Graham Ward (Tinman), while NIcola Bilton was very wicked as the Wicked Witch and Denise Palin very good as the Good Witch. All of these were well supported by the remaining cast and chorus. There were lovely performances from the Munchkins, showing plenty of emerging talent for future shows. Good costumes and a fine set and lighting enhanced the performance. Such a long show might have benefited from a few cuts although the odd technical problems with scene changes on the opening night did not help in this respect. However, overall it was very good entertainment.