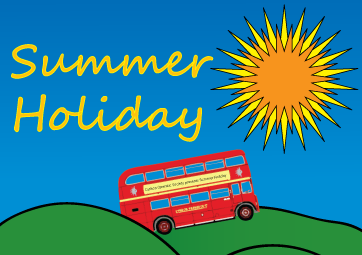 "This musical comedy will have you wanting to dance in the aisles ... Fabulous dance routines ... memorable songs"

"This musical is full of fun, romance, bright costumes and well known songs... The talent in this group is outstanding: the show was of a professional standard... Do not miss this show"

Based on the film 'Summer Holiday' directed by Peter Yates
Screenplay by Ronald Cass and Peter Myers, by special arrangement with Studio Canal
Stage Adaptation by Michael Gyngell and Mark Haddigan
Orchestrations by Keith Strachan
This amateur production is presented by arrangement with Josef Weinberger Ltd

Let Us Take You For A Ride with an evening of fun, laughter and Foot Tapper entertainment. With only Seven Days to a Holiday our Bachelor Boy (I'm The Lonely One) Constantly goes Round and Round, as Time Drags By. Then he meets a Living Doll, says, "Gee Whizz, It's You" and "I Could Easily Fall In Love With You".

On The Beach, The Young Ones ask the girls "Do You Wanna Dance?" Travels through the countries of Europe ensue, and our young guys and girls work out if they're going to get together. We Say Yeah! So The Next Time you put on your Dancing Shoes, I've Got a Funny Feeling you're going to find it A Swinging Affair!

Rachael will be running dance classes from Thursday 19th July @ 7.30pm though to the start of the season (pending confirmation of room availability), to get you in shape for the new season, and for fun ( ! ). As usual there will be a £2 charge to cover room hire and society expenses. At the same time, in the smaller room, Chris will be running free 1 to 1 sessions to help prepare everyone for the company auditions. These will be informal sessions of about 20-30 minutes, on a first come first served basis. We will go through your audition song, and discuss how best to present it. Email Chris to book a time slot.

Summer Holiday is different to many musicals, in that the principal cast is varied and equal ñ they all share the limelight. This includes the ensemble, who will also have an opportunity to play various cameo roles.

As a result, your production team want to try a new way of auditioning this year.

The company audition will include elements of dance and drama, in addition to the usual singing. The format will therefore be different to cater for this. The dance and drama will be done in groups of 10 and 5 respectively, with the singing individual as before (see note about 1-1 classes above). The purpose of this is to give all members of the society a better opportunity to shine.

Auditionees will be asked to sign up to an hour-long slot. The first part will be the dancing, then the acting, and then each in turn will sing. You will prepare for the acting in your groups of five, during the 6th September rehearsal, with support from Amanda.

Everyone will be asked whether they wish to be considered for a principal role, and a principal audition slip will need to be completed by the end of the company audition - you do not have to state which part.

Rachael will be looking for 6-8 dancers to form the core of the dances, and this will be done at the company auditions only (there will be no separate dance audition). However, the dance numbers in the show will involve as many as possible (given the choice of set).

Please remember that this audition is workshop based, so your fellow members will be there to support you. We hope this format will be more helpful & less intimidating than previous auditions.

"The boys" and "The girls" (including Don and Barbara) must be able to sing in harmony (at times unaccompanied). Their characters should be contrasting, and they have similar vocal ranges. We will audition them as groups, and may assign people to roles other than the one chosen. Each boy and each girl gets the lead in at least one song.

Please note that although this seems like a "young person's show", there needs to be a wide range of age and character in the ensemble. The bus travels though various communities in Europe, and they need to be populated with "real" people. We have much flexibility in how we cast the show, and everyone will be given fair and due consideration.

We expect the following scenes and musical numbers to involve some or all of the chorus. There may be other walk on parts in the other scenes.

There is only one recording of the stage musical available, starring Darren Day. Please don't buy it. It's rubbish. We will try and compile a recording with as many of the songs on it as possible. But don't buy the Darren Day recording, it will only put you off. Please.

Just in case you don't know, this year your production team is

You can contact us using the address productionteam at carltonoperatic.com. Please don't hesitate to ask any questions you might have about the show, your involvement in it, the audition format, or anything (as long as it relates to the show!) We are here to help, and make the season a fun and enjoyable one.