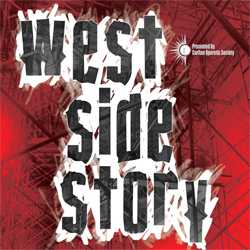 Based on a conception of Jerome Robbins
Book by Arthur Laurents | Music by Leonard Bernstein | Lyrics by Stephen Sondheim
Entire original production directed and choreographed by Jerome Robbins
Originally produced on Broadway by Robert E. Griffith & Harold Prince by arrangement with Roger L. Stevens
This amateur production is presented by arrangement with JOSEF WEINBERGER LIMITED on behalf of MUSIC THEATRE INTERNATIONAL of NEW YORK.

Loosely based on Shakespeare's Romeo and Juliet, and set in the urban slums of New York, the show uses, as its modern equivalents for the Montagues and Capulets the juvenile gangs of local whites (the Jets) and immigrant Puerto Ricans (the Sharks). They do battle with childish seriousness over the streets that they claim as their territory.

The Jets, boastful and contemptuous of the immigrants, call on Tony, who used to be their leader but now has a regular job and is on his way to adulthood, to help their new leader Riff and the gang in a challenge to the Sharks. Riff reminds Tony of his old allegiance and of how menacing are the newcomers. Tony reluctantly agrees but soon becomes excited with the thrill of potential combat.

Meanwhile in a bridal shop, Anita, the sweetheart of the Shark's leader, Bernado, is converting Maria's communion dress into a gown for the dance that evening. Maria is Bernardo's sister. He has brought her from Puerto Rico hoping that she will marry his best friend, Chino.

At the dance Riff challenges Bernado and the groups agree to do battle. Tony and Maria have seen each other and fall in love, instantly and become oblivious to the menace that is building up around them.

Most of the Puerto Ricans are nervously elated over the coming conflict but they are confident and determined to assimilate into the American way despite the homesickness that some of them feel.

The threatening groups are dispersed by a policeman but the separation is only temporary. What could have just been a game of muscle flexing turns to tragedy when Bernado provokes a knife-fight which results in Riff being killed. Bernado is murdered in turn by the avenging Tony. He flees to the home of Maria who has been told of the news of her brother's death by Chino. Her love for Tony overcomes her hatred for her brother's killer. Tony promises to take her away and in a dream ballet sequence the battle is re-enacted but this time the lovers are not allowed to meet. The dream turns into a nightmare but Tony and Maria flee.

The gangs meanwhile are concerned with their inevitable encounter with the law and mockingly imagine how they will deal with the situation in the number "Gee, Officer Krupke". Anita taunts Maria for remaining faithful to Tony but nonetheless agrees to deliver Maria's message for Tony to the Jets. Unfortunately the Jets threaten to abuse and rape her and she is driven to claim that Chino has shot and killed Maria. Hearing this, angry and wild with grief Tony goes after Chino, but Chino coolly shoots him just as Tony discovers that Maria is not dead after all. Somewhat ashamed, the Jets and the Sharks between them remove Tony's body as Maria follows them.

Synopsis and musical numbers list from The Guide To Musical Theatre